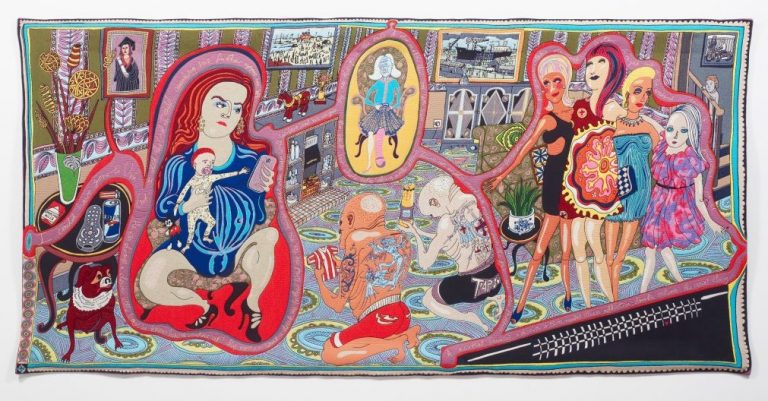 The Vanity of Small Differences is a series of six large-scale tapestries by the Turner-Prize winning artist Grayson Perry.

Inspired by William Hogarth’s A Rake’s Progress the tapestries, each measuring 2m x 4m, chart the ‘class journey’ made by young Tim Rakewell and include many of the characters, incidents and objects Perry encountered on journeys through Sunderland, Tunbridge Wells, and The Cotswolds for the television series All in the Best Possible Taste with Grayson Perry. The television programmes were first aired on Channel 4 in June 2012. In the series Perry goes on ‘a safari amongst the taste tribes of Britain’, to gather inspiration for his artwork, literally weaving the characters he meets into a narrative, with an attention to the minutiae of contemporary taste every bit as acute as that in Hogarth’s 18th century paintings.

Arts Council Collection, Southbank Centre, London and British Council. Gift of the artist and Victoria Miro Gallery with the support of Channel 4 Television, the Art Fund and Sfumato Foundation with additional support from Alix Partners.