Young people are the future and so it is so important to make sure that their views, opinions, and ideas for change are heard and considered.

Over the past 6 months the Penzance Town Deal Board has been working hard to create and share their vision for a more sustainable future by 2030. Part of this work has been engaging with the community to discuss what they would love to see in Penzance in the years to come. We have been especially interested in ideas that focus on sustainability, clean growth, and that celebrate the beautiful place that Penzance is.

Back in the summer we held a competition for young people. Our question was “What is your vision for the future of Penzance in 2030?”. We asked people aged 10-19 who live in Penzance for their thoughts and ideas. They could answer in any way they wished.

Now we have our winner!

Dan has won our prize of a GoPro Hero 8 and all of the accessories for his insightful, creative, and inspiring ideas concerning the future of Penzance.

Something that we loved about Dan’s ideas was that they picked up on some of the ideas that we had, and were also ideas that other people in the community also viewed as important for Penzance.

Something Dan’s ideas were centred around was the sea, and how we can highlight the sea in our vision for the future. The sea is such an important part of life in Penzance and so we enjoyed that his theme for his ideas was reconnecting with the sea.

One of Dan’s ideas was centred around renewable energy as a way of creating geothermal houses. This idea was influenced by the work that has been done at Jubilee Pool to create a geothermal pool. We loved this idea. Renewable energy will play an important role in the future of Penzance and so making it to homes is important too.

Dan also had an idea about using the sea as a way to create further tourism through a marine discovery boat to explore more of the marine wildlife here in Cornwall.

Dan’s final idea was all about healthy living and making the most of outdoor spaces, and one way of doing this is through an outdoor gym. Only recently the Town Deal Board announced that we will be bringing a free outdoor gym to Newlyn Green for all to use. It is great that already some of Dan’s ideas will be coming to life. We are very excited for this project to be completed soon. 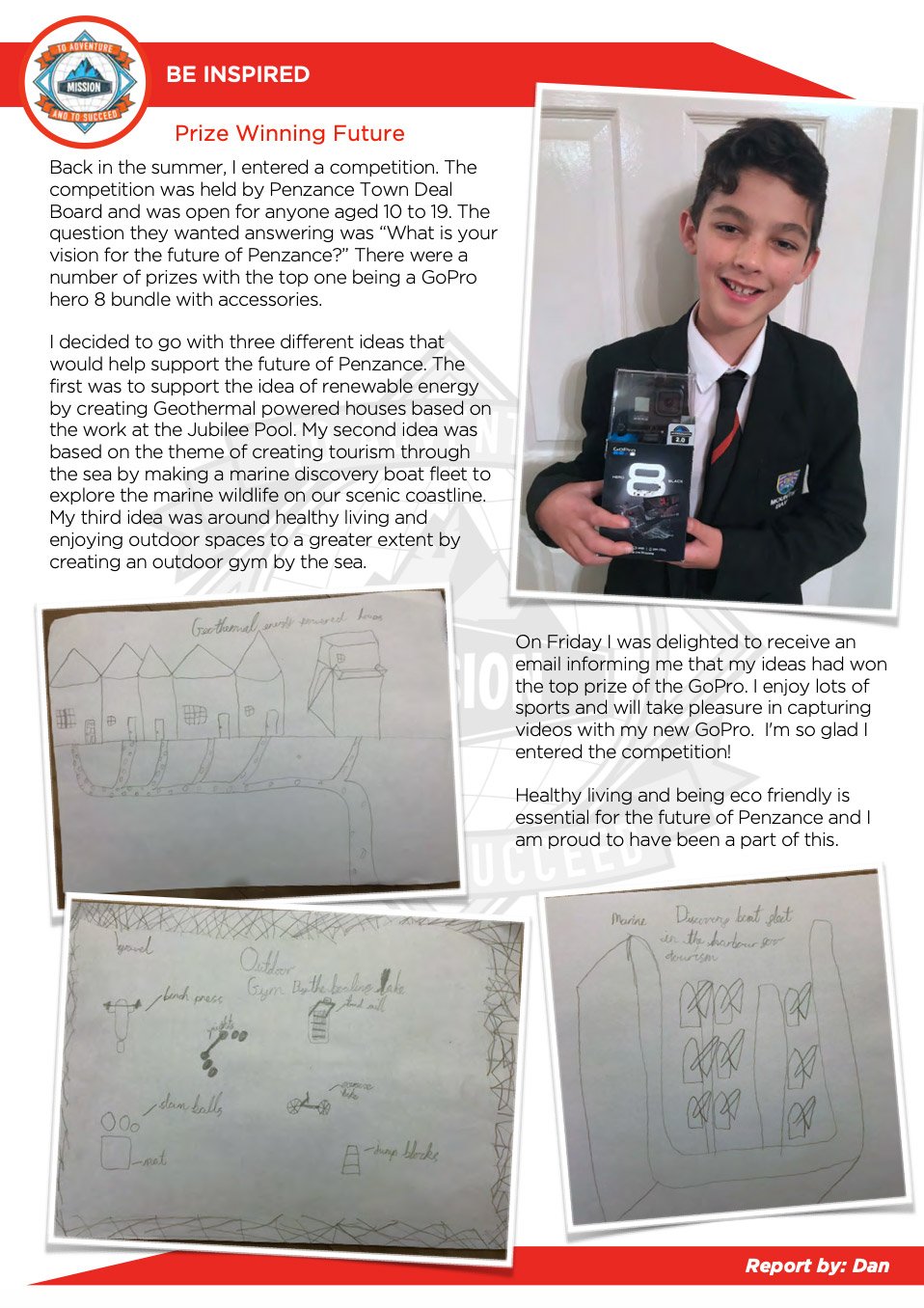 It is great to see young people actively engaging in the future of the town, sharing their thoughts, and inspiring others.

Dan was featured in his school newsletter sharing his ideas on sustainability, and we hope that it has encouraged others to want to voice their opinions and advocate for sustainability.

In the newsletter he states: ‘Healthy living and being eco-friendly is essential for the future of Penzance and I am proud to have been a part of this.’

We love seeing people who will be the future of Penzance become a part of decision making, and believe it should be encouraged as much as possible. But not only this — Dan now has a GoPro which has encouraged him to get out and head to the sea to get some GoPro footage of his water sports adventures.