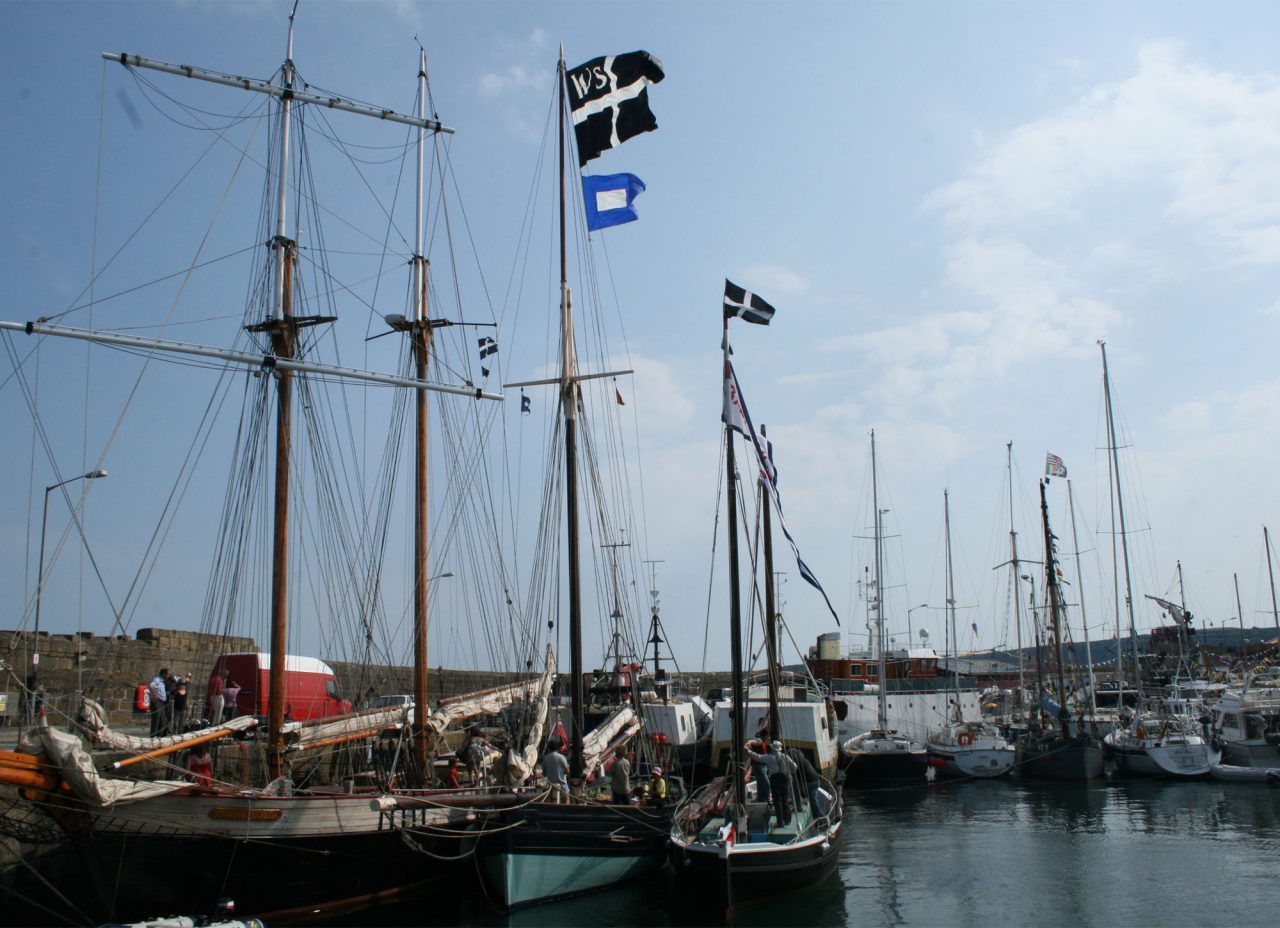 In Chapel Street you’ll find the spot where the news of Lord Nelson’s death was first announced, salt-sprayed from the fishing boat it sailed in on. Beneath the modern-day roads, a network of secret tunnels and escape hatches hint at the old days of evading the excise men.

But it’s not all parrots, eye patches and bootlegged brandy. In the Georgian era, Penzance was a highly fashionable seaside resort. If you were anyone in society, you’d visit for the clean, fresh air and turquoise waters of Mount’s Bay. Gilbert and Sullivan’s classic The Pirates of Penzance was comically named because the town was such a peaceful retreat.

Historically known as Pensans, meaning holy head or holy headland, Penzance incorporates the ancient manor of Alwarton (or Alverton). In the 1300s, this area included 220 households but held no market or fair days. The community’s right to host a market ­– a much fought-over marker of prosperity – was first won by Alice De Lisle, the ‘Lord’ of Alverton, in 1332.

This tradition continued well into the 19th century, as local producers and traders gathered to sell their wares. In the centre of town, butchers’ stalls covered the pavements, while in the market place, fishermen’s wives washed their catch in the gutters. The Green Market was given over to market gardeners, with each stall covered by a large umbrella and accompanied by a half sentry box where its keeper could shelter from the elements. Alongside fruit and vegetables, you might also find leather goods, clothing, books and earthenware. After the impressive Market House (now partly occupied by Lloyds Bank) was opened in 1838, many of the sellers were able to move inside to more comfortable surroundings.

One of the most dramatic events in Penzance’s history took place in the summer of 1595, when an invading Spanish fleet blazed its way through the town, destroying 400 houses. This terrifying event fulfilled a curious prophecy that ‘strangers should land on the rock of Merlin, who should burn Paul, Penzance and Newlyn.’

According to Richard Carew, writing seven years later, the people of Penzance ‘were so intimidated with the ancient prophesy, that they fled in all directions’, leaving the town to suffer terrible damage. Despite this, the locals soon rallied: when the invaders returned the next day to finish the job, a great crowd assembled on the beach to scare them off.

Perched on the edge of the bay, Penzance has a strong seafaring tradition. In the early 1500s, ships were already visiting a small quay here, and by the 1800s this had developed into a busy trade. If you visited the harbour during Georgian times, you might see the steady unloading of goods like timber, iron, salt, fruit, alcohol and linen. In turn, Penzance exported fish, oil, potatoes, tin and copper. By the 1870s, around 400 fishing boats operated in Mount’s Bay, catching approximately 50 tons each day.

“The great variety of shipping, ships of war, merchant men and fishing boats … form a very interesting and delightful scene.”History of Mount’s Bay (1831)

Planning a family trip to St Michael’s Mount? Find all the practical information you’ll need for a fun day out.

Visiting the Isles of Scilly

From Penzance, sail across to the legendary Isles of Scilly: a small cluster of islands just off the coast of…

Step back thousands of years and discover traces of early settlers and Cornish royalty within the landscape of Penwith.

Meet The Pirates of Penzance

Visit Marazion, home to the island community of St Michael’s Mount and its historic castle and gardens.

Spend a day exploring Cornwall’s mining past on the wild Tin Coast of Pendeen and Botallack: from Penzance, it’s just…
Not all trade was strictly legal, however: during the 18th and 19th centuries, smuggling was rife as the Cornish fought back against hefty taxes. A large network of smugglers’ tunnels runs beneath Penzance, spanning out from the harbour to the Abbey Warehouse, the Turks Head and Admiral Benbow pubs on Chapel Street, and to Causewayhead and Market Jew Street. The Admiral Benbow even had its own in-house smuggling ring, known as the Benbow Brandy Men. Also famous were the Carters of Prussia Cove. John Carter, their most notorious member, was widely thought of as west Cornwall’s very own Robin Hood. When his goods were seized and placed in Penzance Customs House, Carter broke in to retrieve them. According to legend, officers immediately knew who was responsible because ‘honest’ John had only stolen back what was his. The number of boats sailing in and around Penzance meant important information could sometimes be passed on before it reached the newspapers. In 1805, the town became the first in Britain to hear of Lord Nelson’s death and his forces’ victory at the Battle of Trafalgar. Local fishermen met the HMS Pickle as she sailed to Falmouth with official dispatches, bringing the news in to be announced from the Minstrels’ Gallery of the Union Hotel on Chapel Street.

While Cornwall’s maritime industries thrived, riches waiting deep underground also brought prosperity to towns like Penzance. As the commercial centre of west Cornwall’s mining industry, Penzance had an important role to play. In the 1600s, it was made a stannary town: a place where tin from surrounding areas was valued and taxed, with a percentage paid to the Duchy of Cornwall. Around the turn of the 19th century, when the roads were still too rough to carry carts, this precious cargo was transported by mules. Each day, a herd of up to 80 mules carrying ore from the St Just area walked down Chapel Street, filling the road and pavement and forcing passers-by to press themselves against the buildings. By the early 1830s, the Duke of Cornwall was able to make £10,000 a year simply by taking four shillings from every hundredweight sold.

While booming as a trade centre, Penzance became a top holiday destination for the great and good of society. An 1831 history of Mount’s Bay gushed about ‘the temperature of the atmosphere, the mildness of the seasons … and the exhilarating beauty of the gentle breezes’. Tourists stayed in fashionable areas with typically Georgian names like Regent, Wellington and Clarence. Today, it only takes a glance upwards from street view to see the distinctive elegance of past times. When the Great Western Railway connected Penzance with London in 1867, it became easier for travellers to visit Cornwall. Invalids came to reap its benefits as a winter health resort, while enthusiasts compared it to Nice, Monte Carlo and Algiers.

“The pilgrim to Penzance in search of either health, rest, or change, need have no fear of dullness.”The Cornish Riviera (1905)

Tweet this
It was during this time that Penzance experienced one of its most popular claims to fame. In December 1879, Gilbert and Sullivan’s comedy operetta The Pirates of Penzance was first performed on New York’s Broadway. Charting the fortunes of Frederic, an apprentice pirate, the production gently played with Penzance’s reputation as a peaceful seaside resort. The appeal of all-singing swashbuckling pirates was soon felt on this side of the Atlantic, and continues even today. The threat of marauding pirates did little to put off visitors, and Penzance continued to grow in waterside appeal. Its unique promenade, the only one of its kind in Cornwall, was built during the mid-19th century. Completing the picture, the Jubilee Pool – an Art Deco saltwater bathing pool ­– was opened in 1935.

As a historic and close-knit Cornish community, Penzance has a number of grand traditions. The best known is Golowan: a vibrant celebration of midsummer that was once lost for a century.

“In no part of Cornwall, is Midsummer celebrated with more hilarity than Penzance and its neighbourhood.”History of Mount’s Bay (1831)

Tweet this
During Victorian times, Midsummer’s Eve saw Penzance burst into life, lit by the flames of burning tar barrels, fireworks and torches carried in procession. On Midsummer’s Day (or Mazey Day), people came into town wearing their best clothes to watch dances and parades and take an afternoon jaunt on the water. The day following, known as Quay Fair Day, saw fruit and confectionery stalls pop up all over the quay. By the 1890s, however, the entire celebration was seen as a dangerous fire hazard and outlawed. It wasn’t until 1991 that the event was revived – growing in numbers and popularity ever since. Golowan’s sister event is Montol: a winter festival that culminates on 21 December in a celebration of the coming year. Montol is distinctive for its Cornish guise dancing tradition, in which dancers dress in disguise (often ‘mock formal’) with masks, veils or make up, and pass through the streets. If you visit at this time of year you’ll find fire-lit processions, traditional music and performances. Today, Golowan and Montol are celebrated in full flourish around the town, folding back the layers of time as the community draws together.
Menu
Menu
Menu
Facebook Instagram Envelope
Menu
Menu