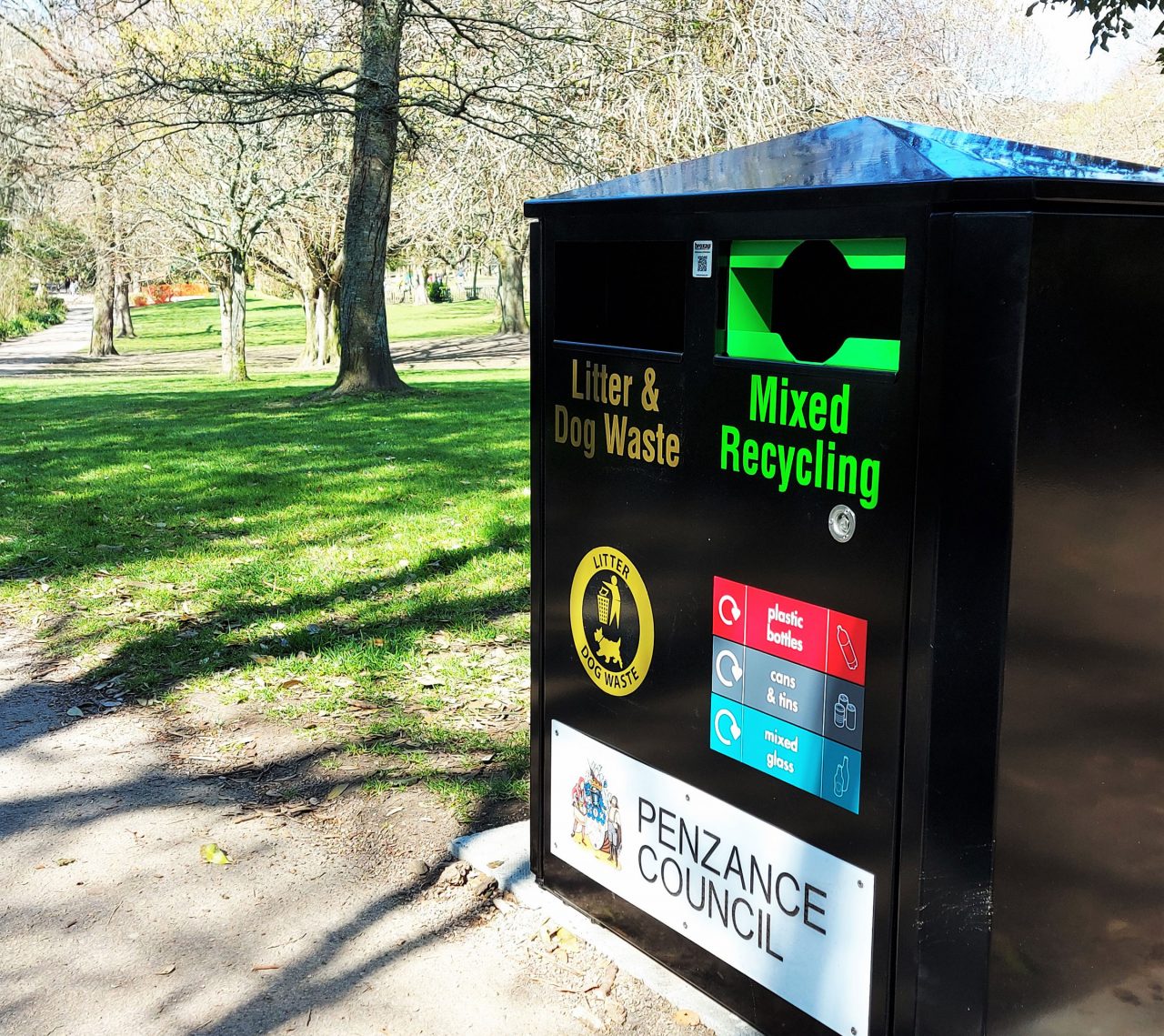 New dual purpose recycling bins are being placed in key locations across Penzance as part of a scheme being run in partnership with Cornwall Council and waste contractor BIFFA to encourage more people to recycle.

Funded by Penzance’s Town Deal Board through the Accelerator Fund with the support of Penzance Council, Penzance BID and Sustainable Penzance, the new bins have two separate compartments -one for people to recycle cans and plastic bottles, with the second section for general litter and dog waste.

Waste deposited in the bins will be collected and then recycled as appropriate by BIFFA as part of its contract with Cornwall Council.

“We are delighted that Penzance has been chosen to take part in this waste project” said Councillor Jim McKenna, Chair of Penzance Place Shaping and Cornwall Councillor for Penzance Promenade.   “As the first town in Britain to achieve “plastic free” status in 2017, and one of the first to declare a Climate Emergency, we are committed to encouraging recycling and protecting our environment”.

“We were very keen to provide these new bins for use by both residents and visitors to our town and will now be working closely with our partners to monitor and facilitate this scheme”.

So far five of the town’s existing waste bins have been replaced with the new dual purpose recycling bins. These are at the Promenade, the Harbour car park, Market Jew Street, Causeway Head and at Greenmarket.

“The aim of the project is to make it as easy as possible for people to recycle while they are out and about in Penzance” added Penzance BID Manager Jessica Morris.  “As this is a new scheme we want to encourage as many people as possible to make good use of the bins and recycle more waste.

“We can then roll out a wider programme to replace all of our standard bins with these new dual purpose recycling ones”.

The new scheme follows on from the work already carried out by Penzance Council to deliver its Climate Emergency Action Plan. Multi use waste bins (for general litter and dog waste, and mixed recycling ) installed by the Council in Penlee Park in April have proved so popular additional collections are now being made every week.

The waste scheme is the latest in a series of Accelerator funded projects aimed at promoting sustainability and green travel.

Last week seven new bike shelters were installed in a number of council owned car parks to complement the aims of the Healthy Streets scheme to promote cycling as a healthy, active and low carbon transport alternative to the car for shorter trips around the town.

In addition to the Healthy Streets proposals to increase opportunities for walking and cycling on the promenade, which are being funded through the Government’s Active Travel Fund,

There are also a range of other projects being developed across Penzance with the support of the Healthy Streets PZ team which are increasing opportunities for walking and cycling through the town.

These include creating a fully sustainable network of safe and accessible walking, and cycling routes, with 15 km of local cycling routes connecting residents and visitors to the town, schools, waterfront and cycle parking. There will also be improvements to public transport and a new shop mobility scheme, together with 4000 sqm of improved public realm and urban green space.

Investment in also taking place in key sites such as the Market House, Coinagehall Street, Backlands and the harbour, as well as in cultural building such as the Acorn Theatre, Newlyn Art Gallery, Morrab Gardens and Penlee House.