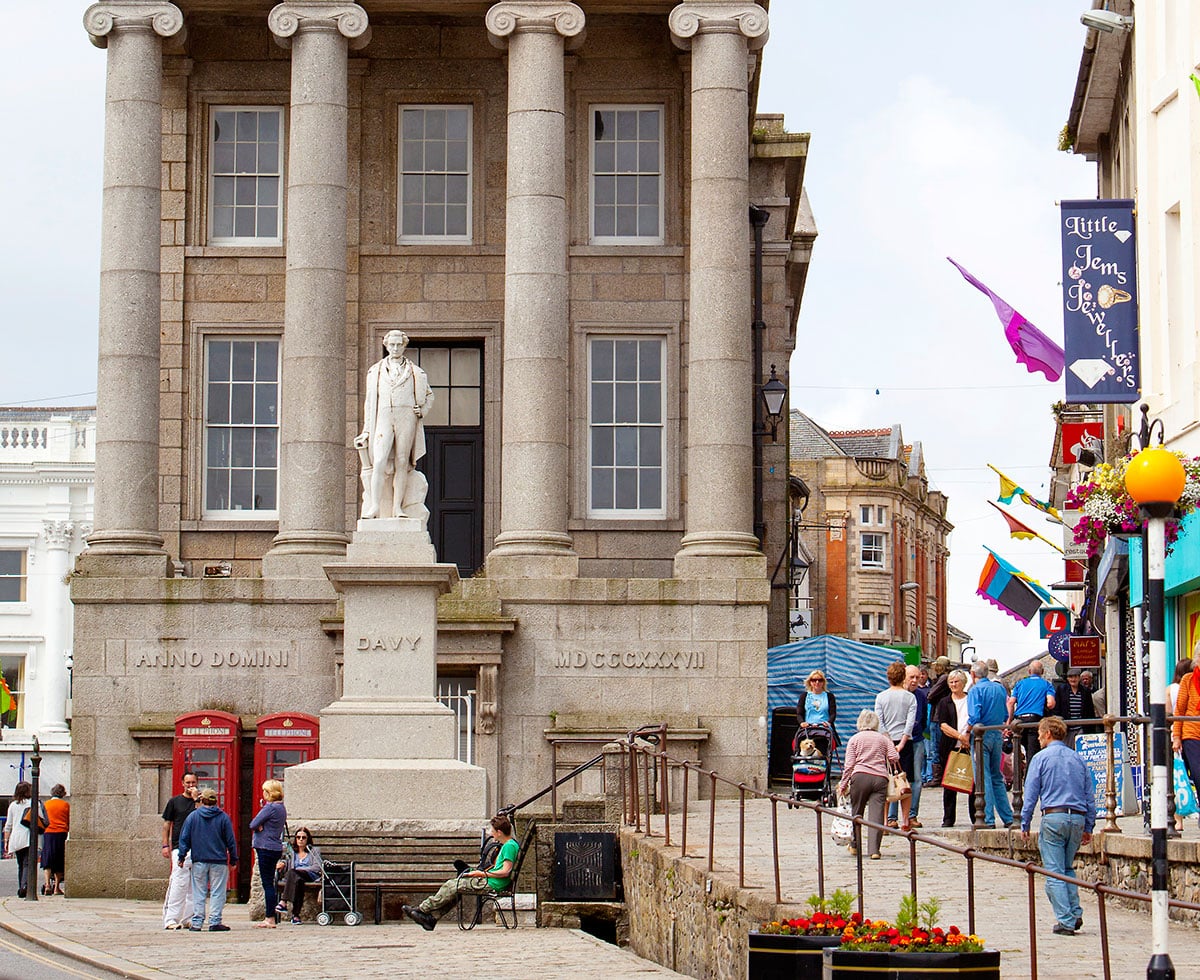 Penzance may not be the first place you think of when it comes to Cornwall’s industrial heritage. But although its landscape isn’t filled with ruined engine houses, the town was once an important location within the mining landscape. In many different areas, from finance to education, Penzance was a major player in this lucrative trade.

Penzance’s most important role in the Cornish mining industry was as a commercial and financial hub. Made a Coinage Town in the mid-1600s, it was an administrative centre, where mine owners brought ore to be assayed (quality checked) and taxed before sale. Originally, the Coinage Hall was at Market Place (on a spot later replaced with the impressive Market House in the 1830s) but was moved nearer the quay in 1816.

As an industrial centre, Penzance also had an independent bank built on mining. The Bolitho family’s ownership of the Chyandour smelting works saw them regularly carrying out transactions with miners and merchants; a process formalised when they created the Bolitho Sons & Co. bank (later the Mounts Bay Commercial Bank) in the Count House at Chyandour. As it prospered, the bank moved into Penzance and incorporated other local banks to become the Consolidated Bank of Cornwall. This eventually became a part of Barclays, which continues in the town today.

Penzance’s Wherry Mine was opened (or ‘sunk’) in the 1770s on a rocky outcrop in the sea at Wherrytown. The mine’s submarine position meant it was always in danger of flooding, with miners working 17 fathoms (31 metres) beneath the waves and the entrance covered in water for as many as ten months every year. When work could take place, the sea’s roaring was said to be close enough to be heard by the men below.

Working in the mine was tough: in 1791, a small group of 18 miners worked for eight hours each day, but spent two of these hours pumping water out of the workings before they could begin. In 1798, Wherry Mine was disastrously damaged when a ship broke anchor and careered into its bridge and machinery. Though some attempts were made to continue working, the mine closed soon afterwards.

You’ll find the hamlet of Chyandour on the outskirts of Penzance, between the railway station and roundabout. Though this is now a peaceful spot, it was once a hive of mining activity. Here, in the mid-1600s, John Tremenheere established a smelting works to process tin. By the mid-1800s, the business was run by the successful Bolitho family, who lived at The Coombe and later bought the Trengwainton estate in nearby Madron. At this point the smelting works was one of the largest in Cornwall, with four furnaces processing and purifying ore.

As the Cornish mining industry declined, the effect was felt through its associated industries, with Chyandour finally closing in 1911. Very little now remains of the buildings, but the Count House is still in use today as the Bolitho Estate Office, while terraces of small cottages pay testament to the labourers that once lived and worked here.

Penzance’s most famous son, Sir Humphry Davy is forever linked with his invention of the miners’ safety lamp. Created in 1815, the Davy Lamp was actually designed for use in northern coal mines, rather than Cornish mines. There, pockets of dangerous gas known as ‘firedamp’ were liable to combust when coming into contact with a naked flame.

Davy’s lamp provided a flame to light the dark tunnels but protected it with wire gauze that absorbed the heat. His invention saved the lives of thousands of coal miners, and spared many more from serious injury. To celebrate the achievements of this remarkable man, a statue of Sir Humphry Davy (complete with lamp) was erected on Penzance’s Market Jew Street in 1872.

During the 19th century, many miners and future miners lived and worked in west Cornwall. The concentrated industry meant that there was a great need for a mining school, where skills and techniques could be shared. As a major commercial and scientific centre, Penzance was an obvious location and in 1890, the Penzance Mining and Science School opened its doors in the Art School on Morrab Road.

The institution was a success, with one pupil being awarded the national Queen’s Prize for his papers on metallurgy. In 1910, the Penzance, Camborne and Redruth mining schools were combined to form the School of Metalliferous Mining (now the Camborne School of Mines) in Camborne.

In 2016, to celebrate the tenth anniversary of this status, the UK’s largest ever mechanical puppet, measuring over ten metres in height and weighing 40 tons, toured some of the most significant locations in the Cornwall and West Devon Mining Landscape World Heritage Site. In recognition of the town’s contribution to Cornish mining, the Man Engine visited Penzance on Friday 5 August. There, it was welcomed by a crowd of around 24,000 people. Though the mining industry no longer thrives in Cornwall, the skills, technology and manufacture that it inspired can now be seen in evidence all over the world.

Only 7.5 miles from Penzance, you’ll find the historic mining areas of Pendeen and St Just. Continue exploring Cornwall’s industrial heritage with a day trip to the Tin Coast.